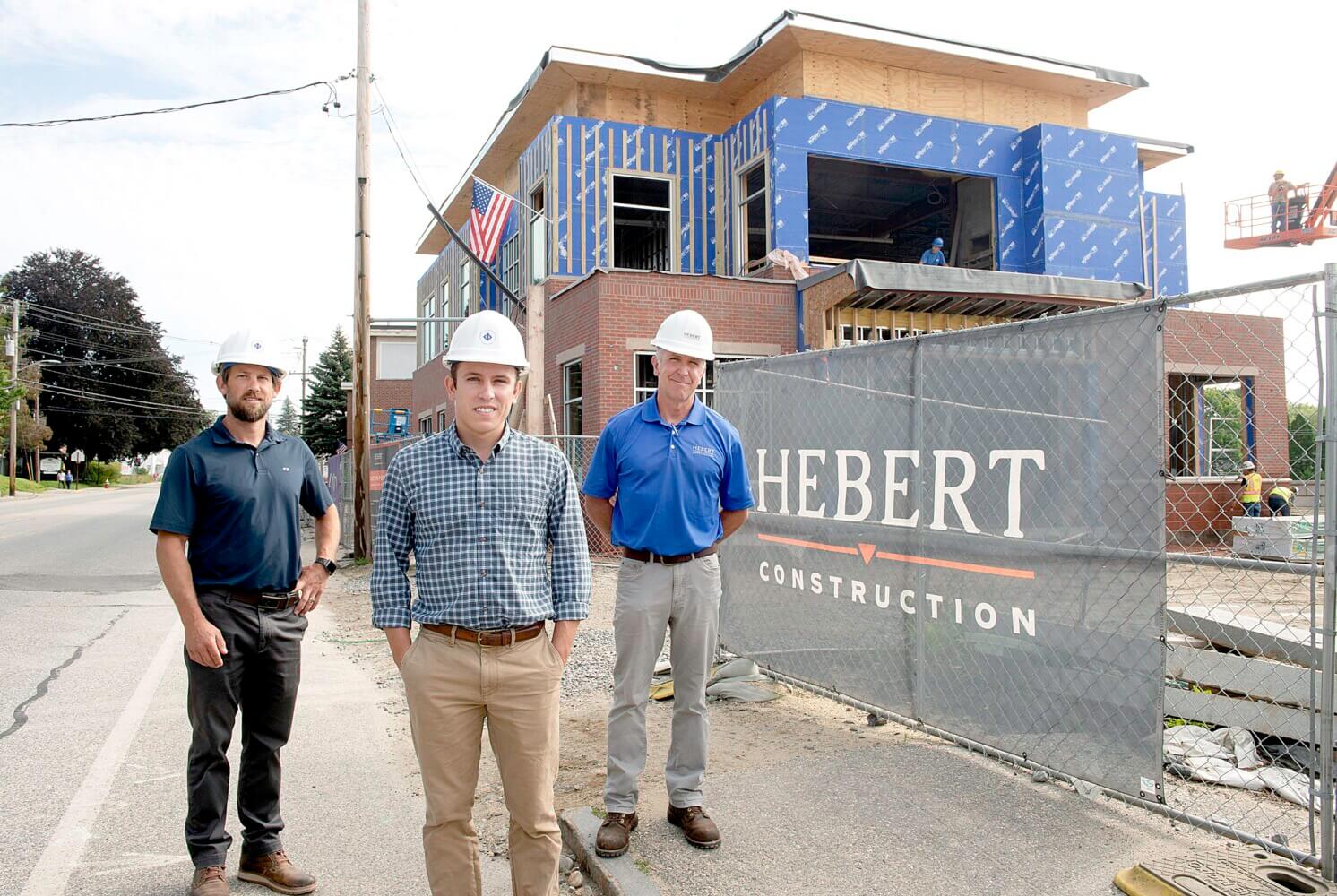 The following is an article from Central Maine profiling Hebert Construction, posted on August 10, 2019 by Kathryn Skelton

LEWISTON — Simon Hebert was seriously weighing a job offer in Montana after college graduation when he asked his dad if they could talk.

“He asked if we had room for him here,” said Mike Hebert. “Obviously, I was excited — I didn’t see that coming. I never tried to recruit him.”

The family-owned company turned 75 this year. Around Lewiston-Auburn, it’s built a little bit of everything.

“The big thing with Hebert I hang my hat on, people say, ‘You’ve been successful, you’ve really grown this company,’ the truth of the matter is Hebert was always able to attract quality carpenters and just quality people,” said Mike Hebert.

That includes Simon, six years ago, the company’s fourth generation.

“I wanted him to do his own thing,” his father said. “It’s great because I sat next to my father for years when I was in the office and now I can experience the same thing with my son, here.”

Edward’s oldest child, Richard, and youngest child, Dan, with about a 15-year gap and four sisters between them, would both join the company, making it Edward Hebert & Sons.

“My grandfather would not allow my father to do any commercial work; he was afraid that they wouldn’t get paid,” said Mike Hebert, 57. “He was out of the Depression, so he was a tough guy, tough guy to work for, and he told my father, ‘When you own this business, you can do what you want, but as long as you work for me, we’re going to continue to do residential.’”

Home base was a garage with a custom cabinet shop behind Edward’s house on King Avenue. The company moved into its current headquarters on Gould Road in the 1970s.

It added another office in Portland just over a year ago.

After his first college co-op spent working for Hebert, he abandoned ideas for law school and decided to stay.

“When I graduated, my father said, ‘I’m just going to give you a little advice, we’ll do what you want,’” Mike said. “He said, ‘You would be better if you could work in the field as long as you can. Gain the most experience. When we’re busting at the seams, we’ll bring you in as a project manager.’”

So for about 20 years, he stayed out in the field: hanging steel, framing houses, learning woodworking skills from the men in the cabinet shop.

“That advice has proven time and time again when I sit at interviews for big jobs, when we talk to engineers and architects and when we work alongside of them,” Mike said. “That experience is what I have benefited from.”

Today, the company is co-owned by Mike and Tim Hebert, Dan’s son. It has 60 employees and eight project engineers. (Mike, Tim and Simon are three of the eight.)

Unlike decades ago, all types of work continue year-round.

“Some winters, we start more projects and we pour more concrete in wintertime than we do all summer long,” Mike said. “There’s no such thing as a (building) season anymore. Projects are schedule-driven. The time of the year for many projects is not even a consideration; you have to satisfy investors. We thaw ground, we cover concrete, we heat it at nigh — it’s a lot of work.”

Projects are a mix of health care, housing, commercial and institutional jobs.

“If we can beat the budget, we like to give money back,” Mike said. “I think you’ve got to kill yourself for your customers. You just have to back up what you say and what you promise and make sure you deliver on time. People don’t forget — if you stay honest and you stay fair, they appreciate that.”

The Bates Mill No. 1 project “is a challenge, but it’s nice to be part of the restoration culture that’s around Lewiston,” Mike said.

He’s seen growth around the city and had high praise for the ease developers have working with city staff.

“I know of a few projects that could have gone in Portland that are going to happen in Lewiston,” he said.

Simon Hebert, 28, said he’s seen a development uptick in the past two years.

“You’re getting some more restaurants opening up, breweries and the revitalization of Lisbon Street’s really been taking off,” he said. “I think it needed that initial monetary base to inject the community. Now you’re starting to see people really invest in new space and new companies coming in as that second wave. We’re just very fortunate to be able to be part of that.”

Simon said he can remember being in elementary school and hanging out in the company warehouse on mornings before school started. Starting freshman year, he had his first summer jobs working for the same supervisor his father had.

That couldn’t happen, he said.